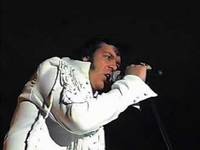 "My grandmom got me interested in (Elvis) when I was 6. I watched him in 'Aloha from Hawaii Live via Satellite,'" the performer said. "When I first saw Elvis on the screen I thought he was amazing. When I saw Elvis on stage, he was kind of a superhero to me."

"I like (performing) because I like to touch people's hearts. I try to do it as passionately and professionally as possible," he said. "I joke around on stage and I try to entertain people. I try to give them more than they expect."

But the best part is the audience. "The thing for me is I just get a kick out of watching everybody. It's a connection with me. I am able to feel the audience," he said.