When I first saw the newest Toyota commercial, you know the one with the tire that rolls through a number of different daily sequences, I was struck by the music. It was an infectuous pop tune with a female vocalist I could not get out of my head. I had to know who it was. A quick stop at Google led me to the band Fisher. 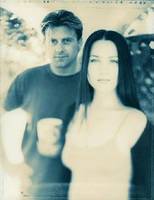 If you've been searching for the band that created the "Beautiful Life" song for the Toyota commercials you've found us. We will be releasing a full length version of the track on our next CD due out March 2005. We have also received word that because of the overwhelming amount of inquires Toyota has received about the commercial, they will soon make the 1 minute edited version of the song available for a free download at their site. We'll post the info just as soon as we get it.


I've since bought their newest CD "Uppers and Downers" at CDBaby.com. It's on the way.
Check out their website at http://www.fishertheband.com. There are downloads of songs, photos, and more. I can't wait to hear more from this band. I'm hooked.